It is another July and my parents have graciously offered to take The Child away for a little while. While cleaning out the void from hell that is my buffet, I came across a lovely hank of Malabrigo lace weight yarn and got to thinking. It's been two years since I put Foo Foo out to the universe, surely it is time for another hugely impractical pair of stockings made in this gushy awesome yarn. And, I haven't shared anything in a long time. Then I started crocheting and changed my mind again. That happens. Frequently. Those close to me refer to it as "annoying" while I like to think of it as the "creative process".

The first Foo Foo was gushy and soft and I still love those stockings, but you know what? I've been working out a lot and I have these muscles now making an appearance underneath all this cutesy mom chub that I have accumulated over the years. This makes it difficult to wear fishnets made from gushy, soft, but not quite stretchy yarn. I got the first sock up to my calf and that was it. No amount of gauge switching or increasing was going to make this sock go over my abundant calf muscle. So, it dawned on me halfway through Bad Teacher on Saturday night, that I had this ball of bright smashing red Lana Grossa stretchy cotton sock yarn that was also purchased at about the same time that the original Foo Foo socks were made, but it had never been touched. For shame!!!! I had this vision of myself wearing adorably somewhat sexy vintage socks with my lacy slip skirt while I fussed over baguettes, fresh herbs, and Merlot at le marché, while La Bolduc played merrily in the background. No such place exists in Winnipeg, though, so I will have to be happy with the bakery at Safeway and the Manitoba Liquor Commission next door to it.

In my fantasy I was also wearing an excellent little cardigan, the likes of which I will have to conjure in another pattern. And a fingerwave. I need to find a hairstylist that can give me a fingerwave.

Apparently it is also considered bad form to pull out your phone and start making pattern adjustments in the middle of a movie.....but again, I see if differently. I like to think of this as "multi-tasking during the boring scenes" not "poor smart phone etiquette" Mental note to me: from now on, always sit in the farthest corner of the back row, just in case inspiration strikes again 😀

I did actually see most of Bad Teacher and it was really funny.

The second Foo Foo is a little different this time around. She is still a fishnet stocking, but I am not in a Ford pick-up truck being the navigator over cruddy rotten roads. I'm at home in my dining room where I have time to count and spend a little more time fussing. This is still a simple pattern, though, and despite the stopping and starting to scribble notes and eat a surprise lunch brought home by The Man, I was done the body of the foot this afternoon at 13:30 and I only started at 12:00. Foo Foo Two may be a little more interesting to look at, but she is still quick. After all, The Child is only gone for a limited time and in the spirit of all things foo-foo, there is love to be made in every room of the house yet again 😀

And bonus, because this sock is done in a stronger yarn, you could wear this out to do your running around. In fact, I have plans that do involve baguettes and roast chicken, and these socks will be on my feet:)

Supplies:
1skein of Lana Grossa Meilenweit Cotton stretchy sock yarn, any colour. I have a great love of "drop dead red"
3.50mm hook
Stitch markers for the cautious, or, in the spirit of Foo Foo, throw caution to the wind!!!
Darning needle
A glass of red wine from somewhere sexy....France, Chile, or Argentina come to mind. I'm enjoying a nice Argentinian Cabernet:)

Gauge: beginning motif without extra increase rounds is 2 3/4" across

Note:
This hook in this pattern with a stretchy sock yarn will produce a very stretchy fishnet stocking. You may not need to size up in hook, but you may want to size down if you have skinny little legs.

Toe:
The toe is worked as a motif. Small sizes stop at round 3 of the motif as published in "Beyond the square: Crochet Motifs", by Edie Eckman. The motif is on pg 91 and the schematic is pictured below. All of Edie's motifs begin with a sliding loop, or you can chain 2, and begin working into the 2nd chain from the hook. Small sizes should work one round of sc as an extra round 4, increasing by 2 sts for a total of 44 sts. Join rnd with ss and proceed to netting.

Medium/Large women's sizes should add an extra increase round after round 3 of the motif:

Round 1: Chain 5, count 3 sts from first st in rnd, place sc in next st, skipping over the others, chain 5, count three sts, sc in the next one, repeat around. At the end of the round, don't place a sc in the last st, but instead ss into the the bottom of the first chain. (11, 12 ch-5 sp). Ss into the middle of this chain space and simply repeat the netting around and around. You can mark the first ch-5 space and move the marker up as you go. Work 12 rounds. These photos were shot with the original Malabrigo yarn that I started using Saturday afternoon, not the red Lana Grossa that I ended up making the socks with, but colour aside, this is what your sock should look like. 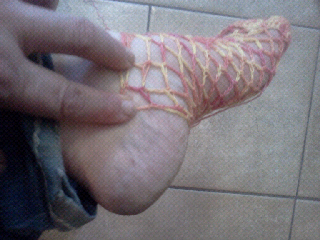 Treat each chain space as being equal to 4 sts.

Carry on like this, building the first side of the heel, until you have 12 sts left on your last RS row.

Repeat this process until you have "picked up" your original 24 sts.

Now the real fun begins!!! When you have picked up your last heel st, the right side should be facing and you will continue on working in netting across the chain spaces of the instep. If the right side is not facing then you made a boo boo in your foo foo. You have two options: either rip back the heel and try to figure out where you went wrong, or pour another glass of wine, shrug your shoulders and work another row on the heel to orient yourself to the correct position. Since it's a heel and not a blood transfusion, I choose option #2 every time, hahaha. If you have the right amount of sts, but are facing the wrong side, then you probably worked into a ss. No worries. The nice thing about heels is that no one will notice except perhaps, that really anal-compulsive yarn geek at the local yarn store.

Work one round of the ch-5 netting. If you want, just keep working in a straight netting tube all the way up the leg, just like the original Foo Foo.

However, this is a good time to get whimsical. If you want to get whimsical in the way that I did, you need an even number of ch-5 netting spaces so do an increase in the round after the heel turning to rectify this. FYI, you are better off increasing than decreasing. If you are working on 11 chain spaces in your netting then just work two of these where you would normally work one to get to an even number.

And remember, there is nothing practical about something called Foo Foo. The more whimsical, the better. I mean, you're already making something that's a little bit frivolous to begin with, so you may as well jump right into the deep end. Just make sure that you write your frivolity down so that your socks match 😀

My frivolity consisted of isolating the central sc above my heel, and when I got close, I skipped the chain space before and after it and worked 8 tc into that central sc instead. I carried on making netting for the remainder of that round. The next round I worked even, working ch-5,sc up to the 8 tc fan. I worked ch-5 netting over the fan, placing sc sts between the 2nd and 3rd tc, between the 4th and 5th tc, and between the 6th and 7th tc. Had I not done that I would have been short by two netting spaces.

If that makes no sense, have another glass of wine. Eventually things will be clear and you will understand as I do, that yarn and glitter hold the universe together.

I did this, alternating a fan round with a plain netting round, until I had 15 fans up the back of my leg. I worked one more plain netting round, working into my last chain space of that round. Then I slip stitched into the next ch-5 netting and drew up a long loop, about 2/3 the height of a dc, ch 1, and worked a dc (this is something I picked up in Couture Crochet by Lily Chin. It's a way of treating taller stitches like sc, so that there are no funny holes created by counting a turning chain as a stitch.) I worked 4 dc in each ch-5 netting space, joining the round with a ss. The next round I worked 4 dc into the spaces between the previous round's 4-dc groups. I repeated that for the third round and fastened off

The only thing I think I would change, having worn these socks for a bit, is sizing up to a 3.75mm hook for the calf. *Sigh*.....I will never have pretty, dainty, girly legs. Just these sturdy old drumsticks :'(